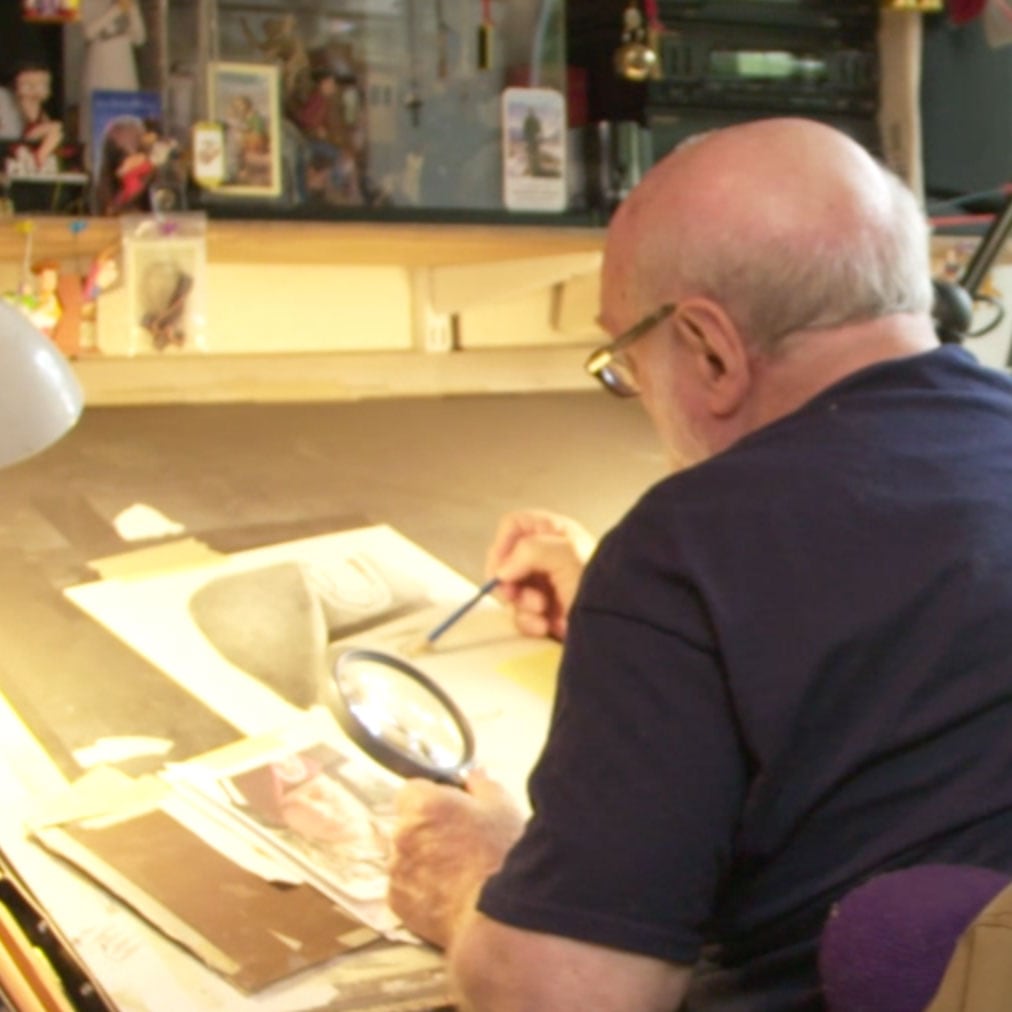 We are celebrating Michael Reagan, one of our favorite artists.

Michael Reagan lives outside of Seattle, Washington and has been creating art since early in high school. He also loved playing football in high school, and one day was run over by a much bigger guy who broke his arm and kept him from playing for a while. While listening to a University of Washington Football game, he picked up a tablet, pencil and a photo of Kate Hepburn. He drew her, loved it, and never put his pencil down. Later in Michael’s career, he was able to do Hepburn’s portrait for her. It was a great experience. She wrote to him in a letter saying how great it was to see drawings from someone who knew how to draw. Micheal worked for almost 27 years at the University of Washington as their unofficial artist, and he wears a National Football Championship ring with his name on it and Artist as his position. Michael’s actual position was with the Trademarks and Licensing Office as their art director, ending as the director of that office. He also helped start the Collegiate Licensing program across the country.

Michael served in the Marines in Vietnam. He joined in 1966 and came home April 10, 1968. When Michael came home from Vietnam, he attended Art School at The Burnley School of Professional Art in Seattle. Art school was where Micheal was introduced to Crescent artboard – he had only used paper until then. He liked the more substantial feel of the Crescent artboards under his pencils and other drawing tools and never looked back.

Michael’s work is well respected, and his portraits were commissioned by many famous people who enjoyed his style and talent. His portraits were also used to raise money for many worthy causes.

Michael was contacted by Cherise Johnson after seeing his charity work featured on TV. She wanted to commission a portrait of her husband Michael, a corpsman, who had lost his life serving his country in Iraq. Michael would not accept money for the portrait but delivered the art to Cherise, who was able to reconnect to her husband Michael through his portrait. This was the beginning of Michael’s life’s work and the reason he started his Fallen Heroes non-profit organization. Michael typically creates two portraits a day of fallen heroes and has completed over 15,000 portraits so far in his career.

Michael talked about his inspiration for doing the Fallen Hero drawings.

“I am a Marine Vietnam Combat Veteran. I know what it is to lose friends in war, firsthand. My experience with my friend Vincent is real, and its effect on me is real. It drives me because some days I am pretty tired and very sad. But I know if I do what I am supposed to do, a family somewhere of someone I didn’t know can feel a little better if I do their portrait. Suicides are a part of my project, and I get up before most people I know to do my drawings. Once in a while, I take time to draw any commissions I might have to help pay my bills. Then some days I just draw anything to help my heart heal, so I can get back to the fallen portraits. Then at the end of the day, I walk 5.5 miles and just talk to the dogs in my neighborhood (I carry treats for them, they like me), I listen to music, try and relax, and heal for tomorrow.”

On March 25, 2015, at Arlington Cemetery The Medal of Honor Society gave Michael the “Civilian Service Before Self” Honors Medal, they called it the Civilian Medal of Honor.

“As a veteran, I couldn’t believe it was happening until a Medal of Honor Recipient told me after the ceremony, that choosing me was a unanimous decision. He commented that I had no idea what I was doing for the families. But they had talked to them and told me to keep up the good work. It’s something I wear when I talk with great pride.”

“The materials I like to use best are Crescent 100 illustration boards, and I like Crescent’s Ultra Black 8 illustration boards when using colored pencils. I truly appreciate Crescents generosity to my work. It’s all done for free so their gift of the board has been wonderful.”

Crescent is honored to be a part of Michael’s work, and we celebrate his service and his commitment to others.